One of my absolute favorite things to do when I travel is seek out local street art. (Check my round-up of the best street art cities around the world.) Fortunately, my hometown has more than a few murals of its own with a super handy interactive digital map run by the Charlottesville Mural Project. Follow this walking tour of the Charlottesville Mural Mile for an hour-long introduction to Cville’s colorful streetscapes. This would be a great addition to your itinerary for the Charlottesville Arts Excursion this September and October!

Disclaimer: I work full-time for the IX Art Park and have been instrumental in creating the Charlottesville Arts Excursion. I did not, however, receive any direct compensation for this post and all opinions are my own. 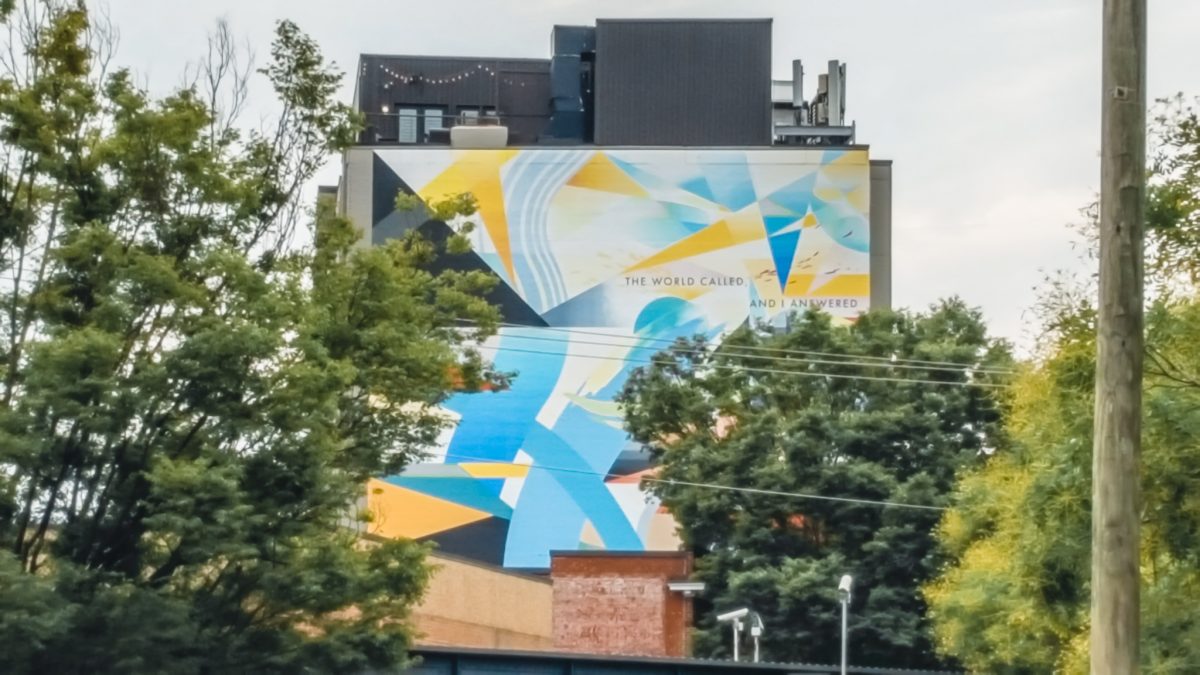 The World Called and I Answered

Your walk begins on the University of Virginia Grounds, where this colorful modern piece by David Guinn rises up the side of the Graduate Hotel on the Corner. This is one of my favorite murals in Charlottesville because it incorporates the poem “Testimonial” by Rita Dove, a former Poet Laureate who teaches at UVA. 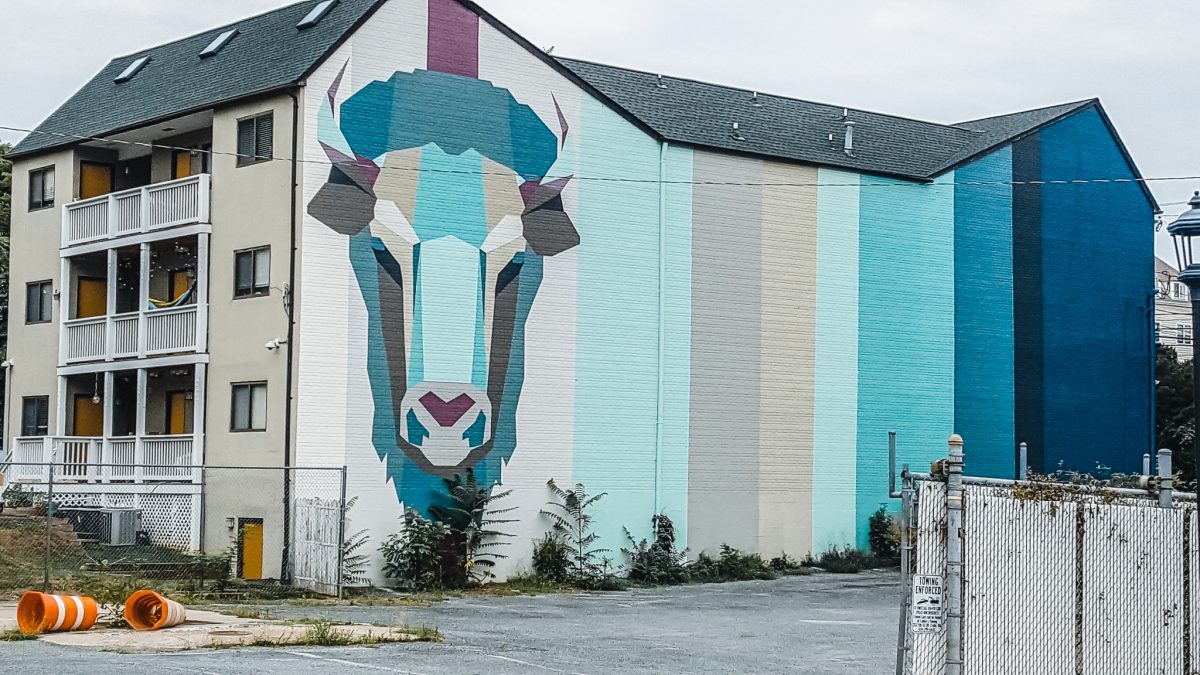 As you pass the hospital on your right,  University Avenue becomes West Main Street. When you reach 10th St, you’ll find a small cluster of murals including this colorful geometric bison, commissioned by the Tom Tom Founders Festival. 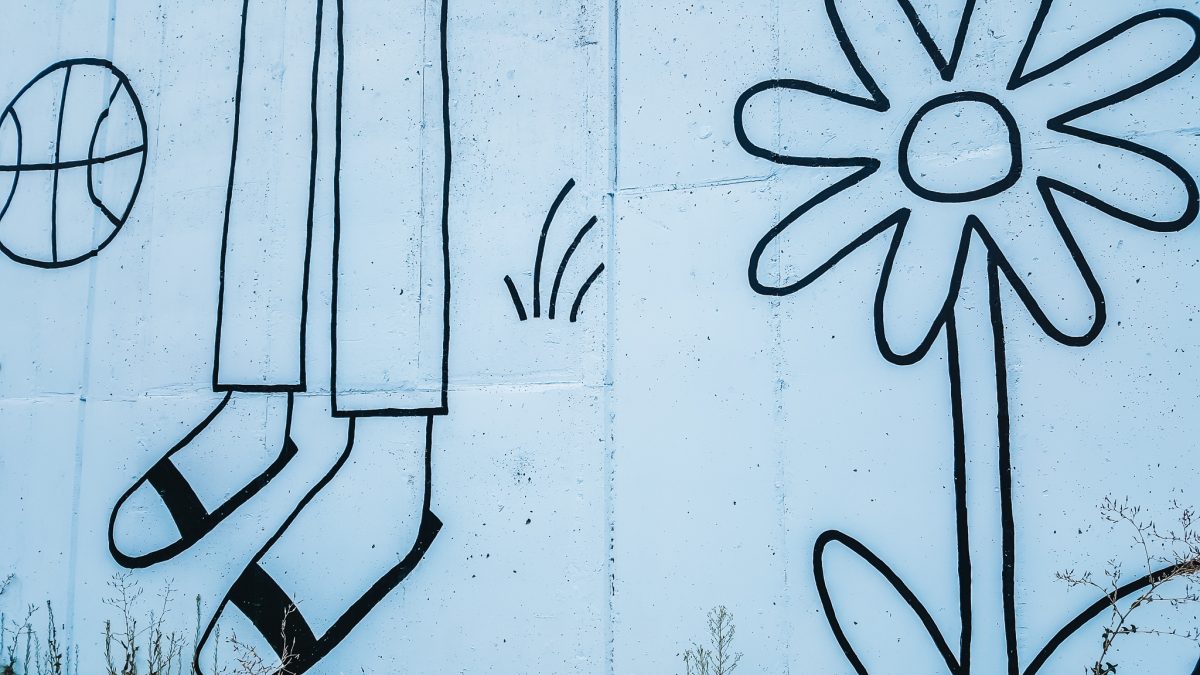 Directly across the street from the bison are a couple cafes and two more murals. This piece at the far end of the parking lot was designed with children from the surrounding neighborhood. 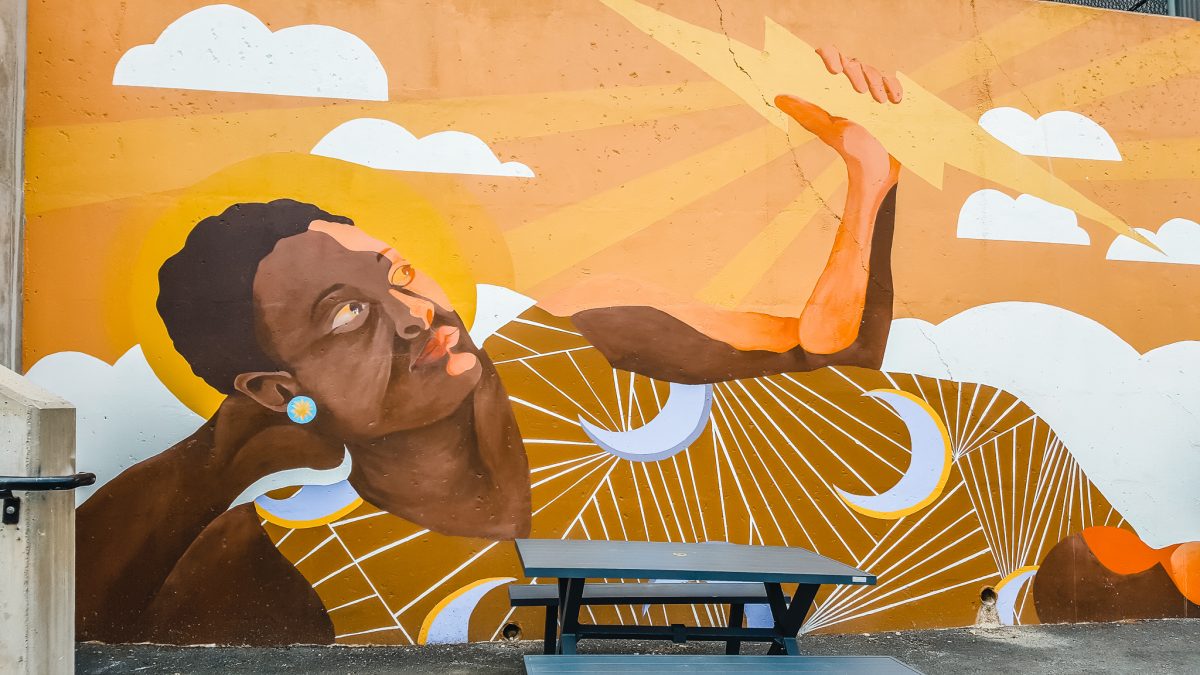 Immediately next to Wall Peace is this powerful depiction of local artist Sahara Clemons’ mother.

Clemons says, “She represents strength and perseverance to me. I wanted to do something that honored her and other black women. Black women are constantly struggling to be recognized and break barriers. I strive to represent those who are invisible and elevate their presence. She is lying down while holding the lightning bolt to suggest the juxtaposition between power and ease. I used to live in this area, a historically Black neighborhood, and I see that it is undergoing transition. I want to ensure that Black people are being represented in this evolving community.”

As Clemons notes, this area is rapidly gentrifying as a corridor between UVA and the Downtown Mall. I’m a firm believer that the best street art reflects a community and a lot of pieces on West Main Street don’t quite meet that mark. This one very much does. It’s one of the best murals in Charlottesville and Sahara Clemons is an artist to watch. 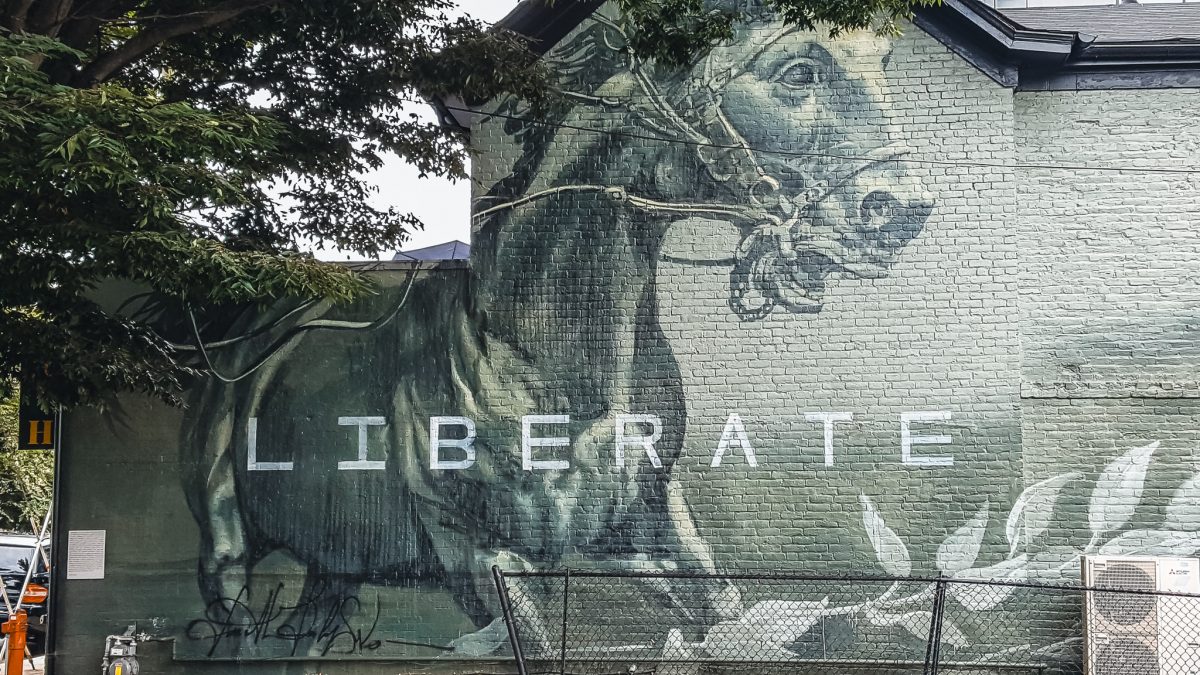 Farther down West Main Street, by Blue Moon Diner, is this newer addition to the city’s streetscapes, a detailed painting of a horse by South African muralist Faith XLVII.

Faith says: “The imagery of a rearing horse, sometimes bridled but with reigns flying loose, signifies a powerful animal which has been subjugated by humankind, and has finally broken free. Inescapably majestic and elegant in their powerful and muscular form, horses have an inherent sense of nobility. The image of the horse carries with it the weight of nationalism and patriotism. Historically, they were the creatures men took to war, to fight and die alongside them with unrelenting loyalty. Within this discrepancy between their physical power and their subservience, they become archetypal symbols for notions of human power struggles, war, nationalism and blind loyalty to leadership. By unleashing or freeing these dignified creatures through these images, we understand their own sense of agency, independent from human quests, ultimately expressing their own innate power. Breaking free, the figures in this series conjure sentiments of resistance, freeing oneself from oppressive ideologies and rulers. And stands as a reminder of our individual, innate strength and ability to stand up to fascist rule, separatist thinking and totalitarian power.” 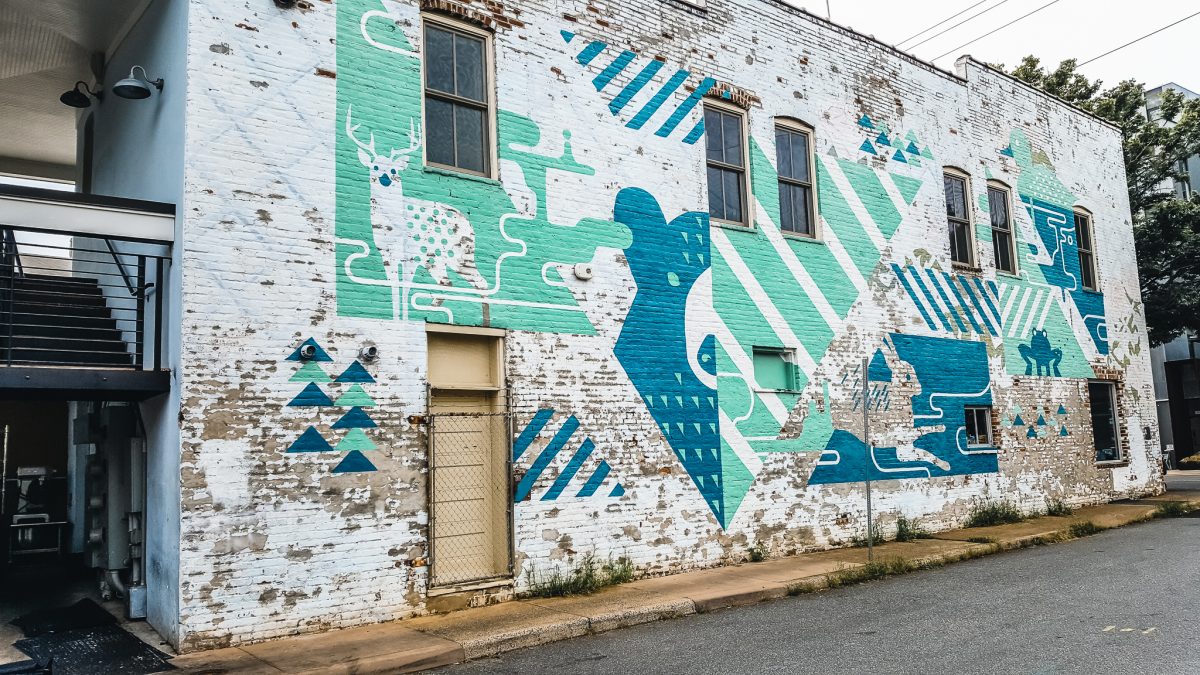 Directly across the street from Liberate is this quirky colorblock animal kingdom, painted by a local graphic designer. If you look carefully, you can still see a hint of the painted roses that adorned this building in the 1970s. I’ll admit I’ve long wished Pamer would have painted something with community input or at least more relevant to the neighborhood, but now that a local toy store has moved in next door this piece is a cute photo op for young families.

Blink and you’ll miss it. The creator of Philadelphia’s Magic Gardens added a sliver of his trademark mosaic magic to a corner of West Main Street.

Cross the major intersection at Ridge Street and either continue down Water Street or bear slightly left to get to the Downtown Mall. Stop at 2nd Street SW to view this tribute to a former mayor of Charlottesville.

Mitch Van Yahres owned a tree company and served on Charlottesville City Council for 8 years before moving to the Virginia House of Delegates. His grandson, a graphic designer, created this piece in collaboration with local muralist Christy Baker, who also painted the bison you saw earlier on West Main Street.

Flex your own creativity at the far end of the Downtown Mall by drawing on this monument to free speech directly outside City Hall. This chalkboard was installed when I was in high school and I remember it being super controversial at the time, but now it’s just a regular part of downtown.

It’s time to leave the Downtown Mall and head into Belmont. Walk down the stairs beside the bus station and former visitor center, turn right onto 9th St/Avon, then shortly turn left at Monticello Road. As you head down Avon, you might spy some old-school graffiti. 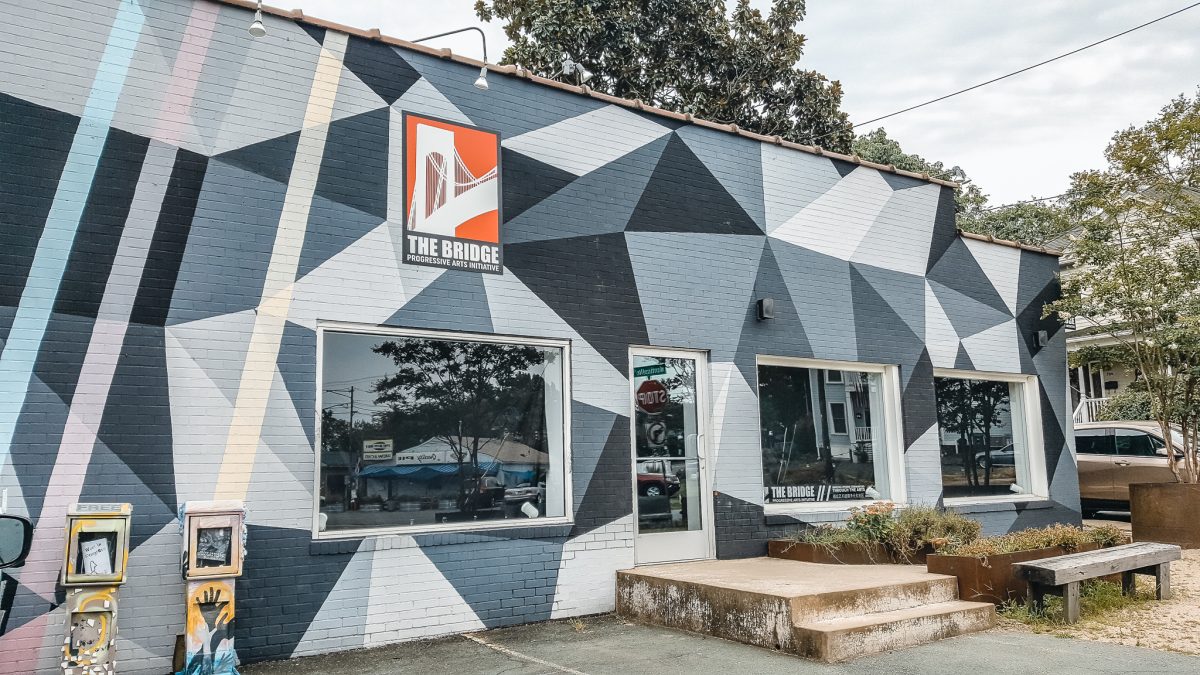 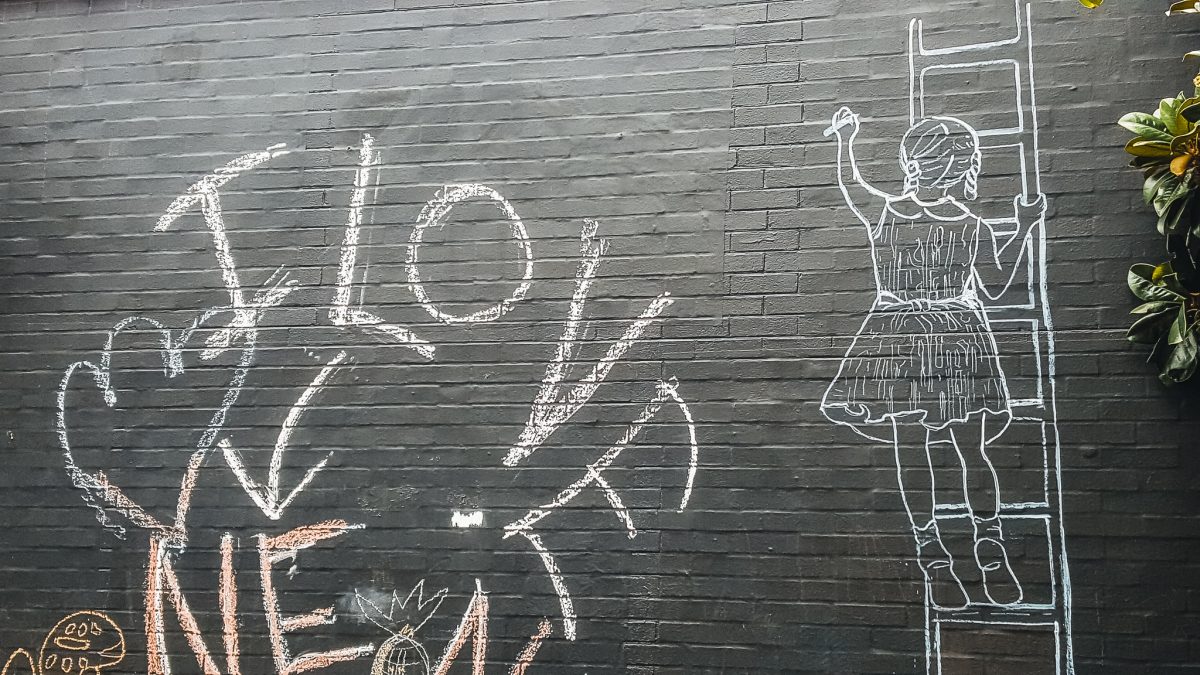 The Bridge PAI is the local nonprofit that runs the Charlottesville Mural Project, and it’s geometric monochrome facade makes a great landmark for turning into Belmont.  Around the side of the building, a neighborhood chalkboard was started by Bolanle Adeboye. 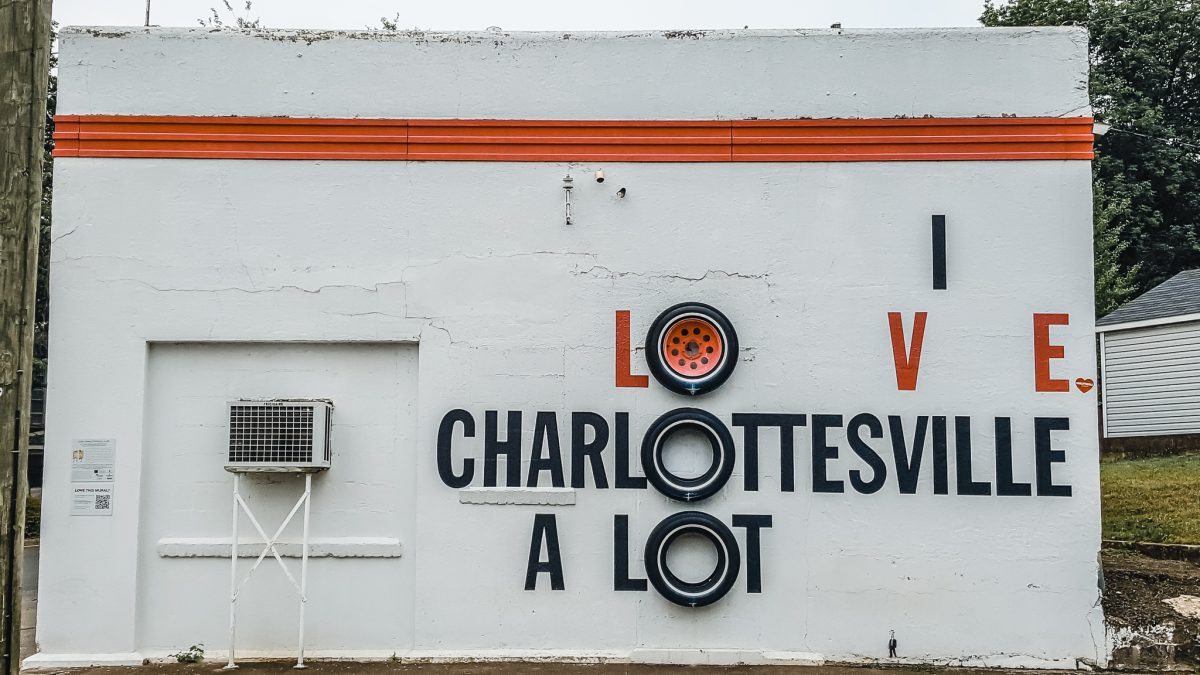 I Love Charlottesville A Lot

As you continue down Monticello Road, you’ll start seeing more cafes and restaurants. This piece is one of your more Instagrammable stops. Created by a local cab driver on the side of a tire shop that’s served the neighborhood since 1973, “I Love Charlottesville A Lot” nods to Belmont’s working class roots. 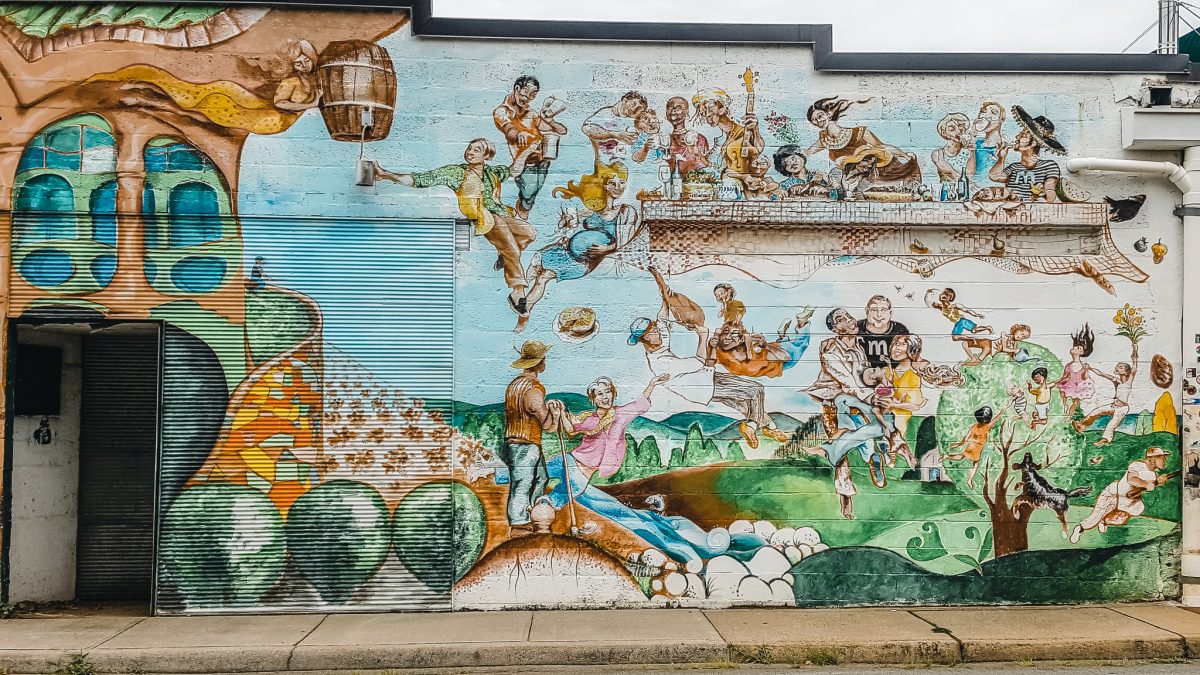 When you see the yellow umbrellas on the patio of Mas (a great tapas restaurant), veer left to spot this piece on the side of the building. Chicho Lorenzo’s work is all over town, so it’s surprising this is the only piece of his on the Charlottesville Mural Mile, but it gives you a taste of his packed-with-color style. Chicho actually once said to me if he tried to draw in black-and-white pencil, it would still come out in many colors. You can see much more of his work at IX Art Park and The Looking Glass. 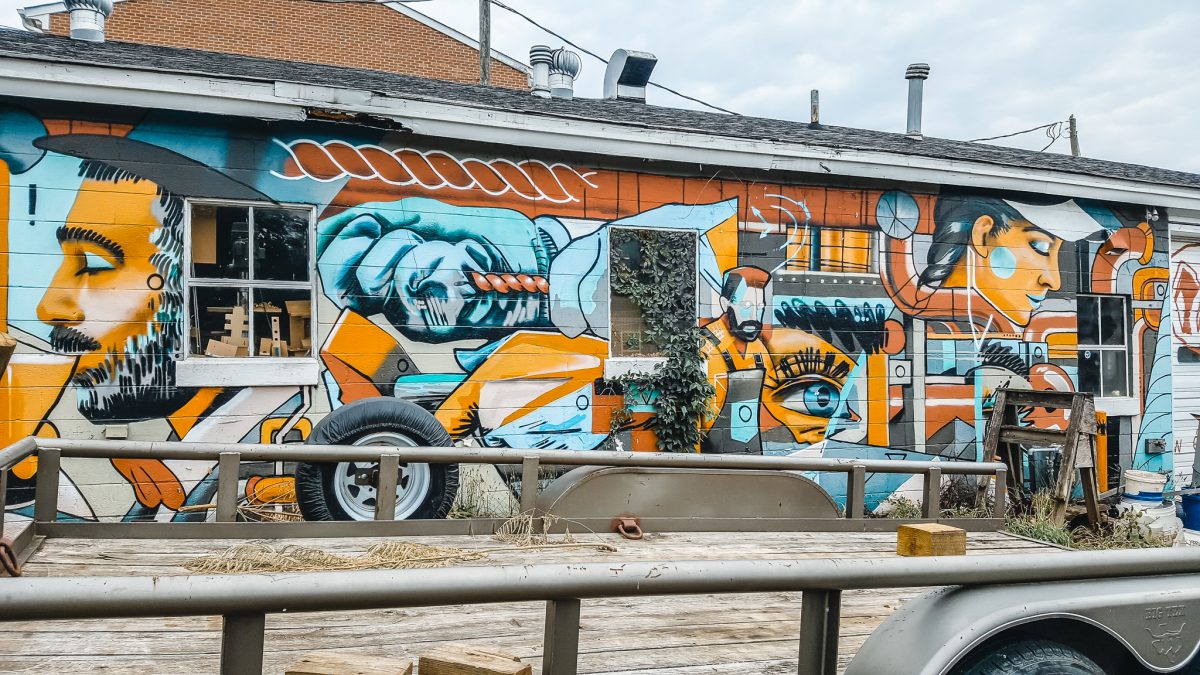 Your final stop on the Charlottesville Mural Mile is a hike, but it’s an important piece. Inspired by the works of Diego Rivera, traveling muralist Wetiko strove to capture this neighborhood’s blue collar history. I won’t mince words: Belmont is a textbook example of gentrification. The neighborhood was predominately working class housing for many years, largely fueled by the Frank Ix and Sons textile factory which shut down in 1999 and whose building now houses the IX Art Park. Restaurants started moving in within the last 10 to 20 years and the area quickly became trendy and sought after. The restaurants are great – tavola and Mas are some of the best places to eat in Charlottesville – but development here came at great cost.

Some Food for Thought

Now that your walking tour of the Charlottesville Mural Mile is done, I highly encourage you head back to downtown Belmont, grab a cup of coffee or a bite to eat and think about the different examples of murals you’ve seen. There are many more murals in Charlottesville, but you’ve gotten a pretty good sample over the last hour or so.

What pieces were your favorite? Which didn’t speak to you as much? What are the differences?

It’s no accident that street art often lines up with gentrifying areas, whether it’s commissioned pieces by outsiders intended to beautify a “run-down” area, or it’s authentic expression from a community feeling pressure under developers. What do the different types of murals you see tell you about Charlottesville?

This is precisely why street art is one of my favorite things to explore in a new city, and I hope it does a lot to enhance your visit!

Head down to the IX Art Park, just a 10 to 15 minute walk from the Downtown Mall. Dozens of murals and sculptures fill the outdoor park, which is free and open to the public 7 days a week. Read more about IX Art Park here. 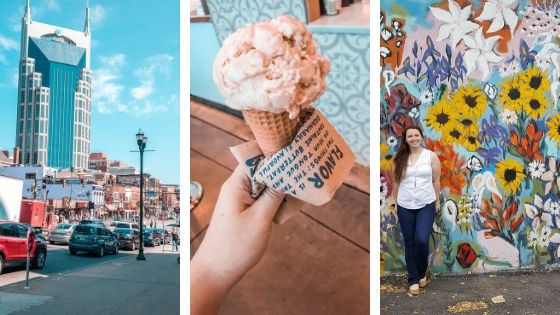 Nashville, Tennessee has exploded in popularity for girls’ getaways and bachelorette parties. But with great Southern food, a powerful sense of community, and rich music… 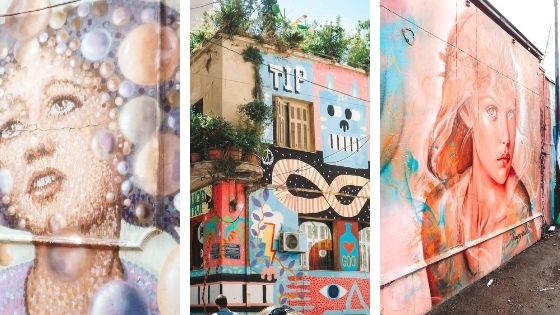 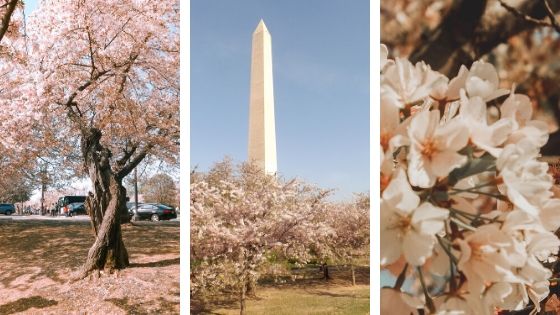 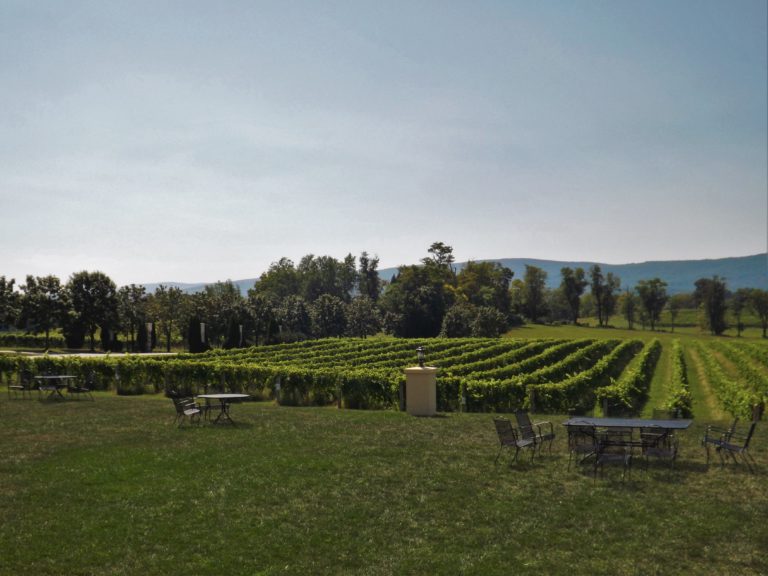 Travel is a skill and the most practiced travelers are able to get past the surface of a place and truly experience what life is like there.

So what special spots in my hometown do visitors miss? It can be hard to decide where to go on a RTW trip, or even just on vacation. When you have creative skills and an… 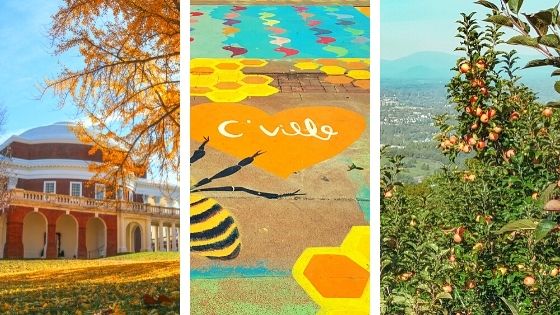 Charlottesville is one of Virginia’s best places for solo female travel. It’s within easy driving distance of Washington DC (it can even be a great…