When I first started planning my RTW trip, I’d never given a second thought to visiting Nepal, and had never even heard of the Annapurna range. Early in my process though, I met Mike and Anne Howard of HoneyTrek, who couldn’t speak highly enough of the tiny Asian nation. While I caught a lot of flack from fellow travelers for booking an organized tour with Intrepid to trek the Annapurna Sanctuary – a range of mountains in the country’s west – it didn’t change any of the scenery. And best of all, my boyfriend got to join me and celebrate his birthday with two weeks of hiking, hot springs, and teahouse stays. Tag along by clicking through the photos below. 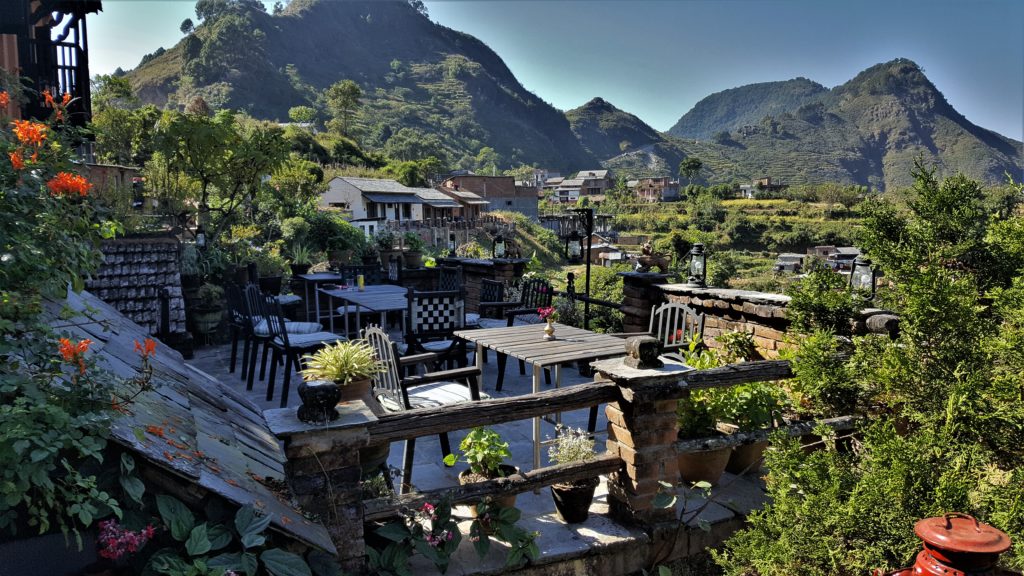 Instead of going straight to Pokhara, we started our two weeks in Bandipur, a smaller central town. 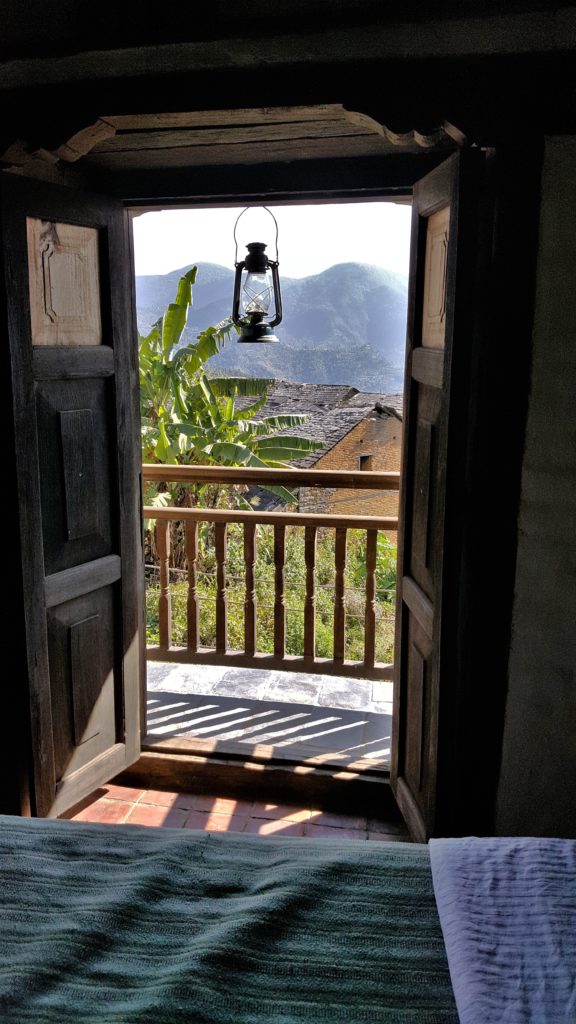 The Old Inn at Bandipur might be my favorite place I’ve ever slept. 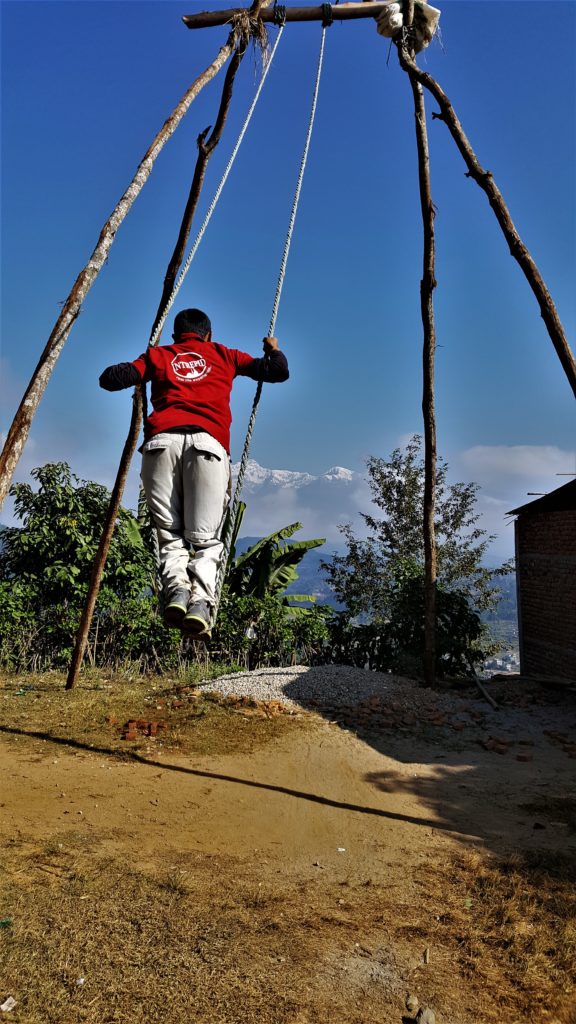 Pros of having a local guide – spontaneous moments like trying out this swing. 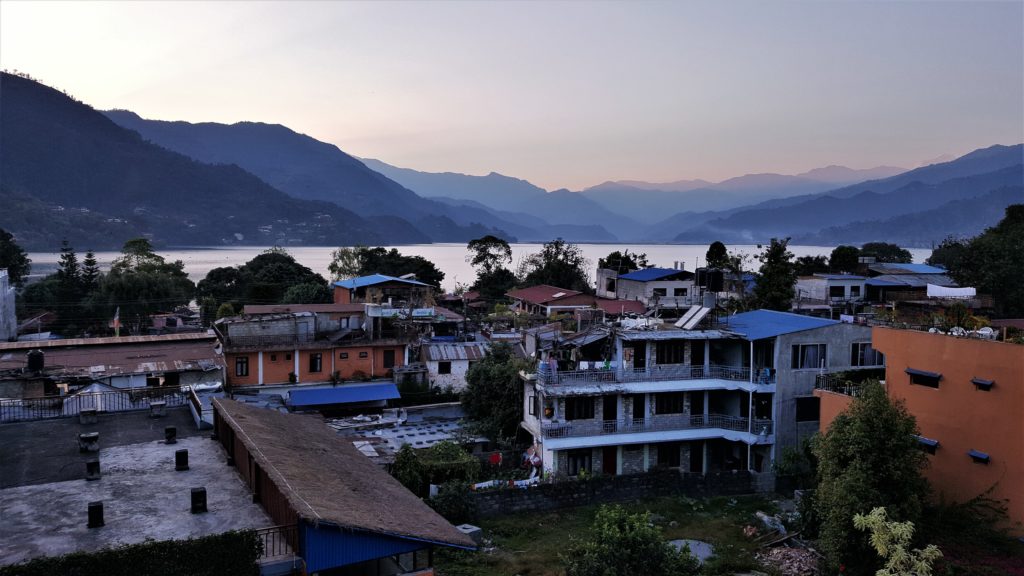 Most treks begin in Pokhara. Nepal’s second largest town has built up around the backpacking industry. 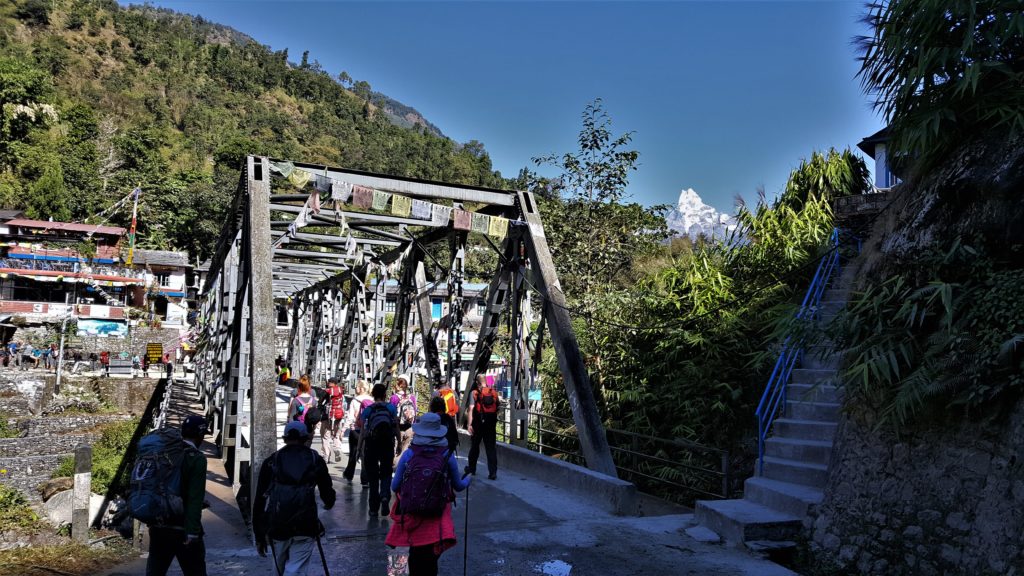 The trek proper starts from Nayapul, continuing up thousands of flagstone steps. 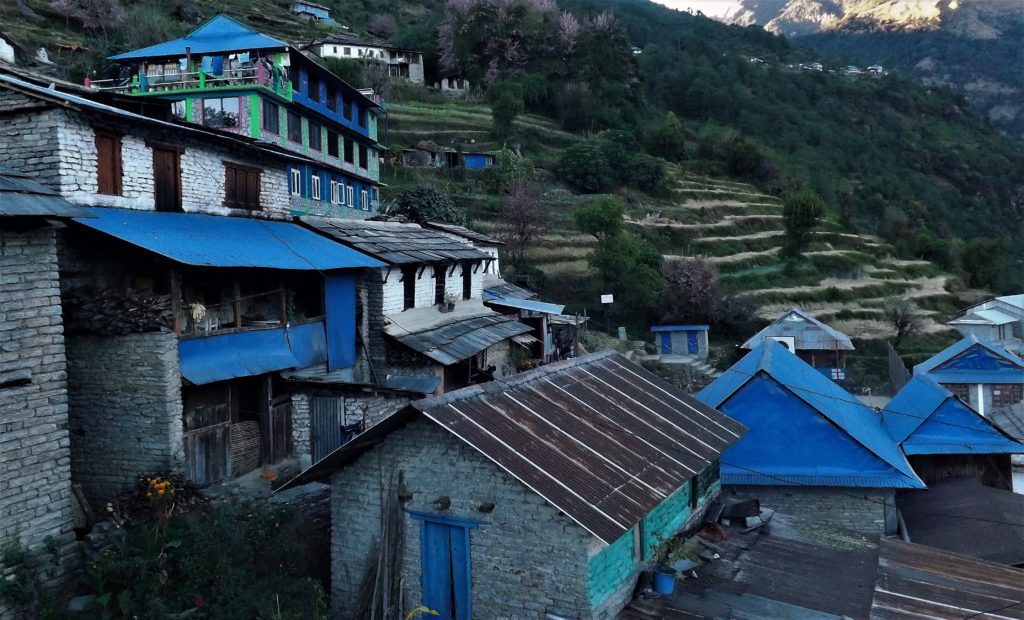 Instead of camping in tents, accommodations are in traditional tea houses like these in Ulleri. 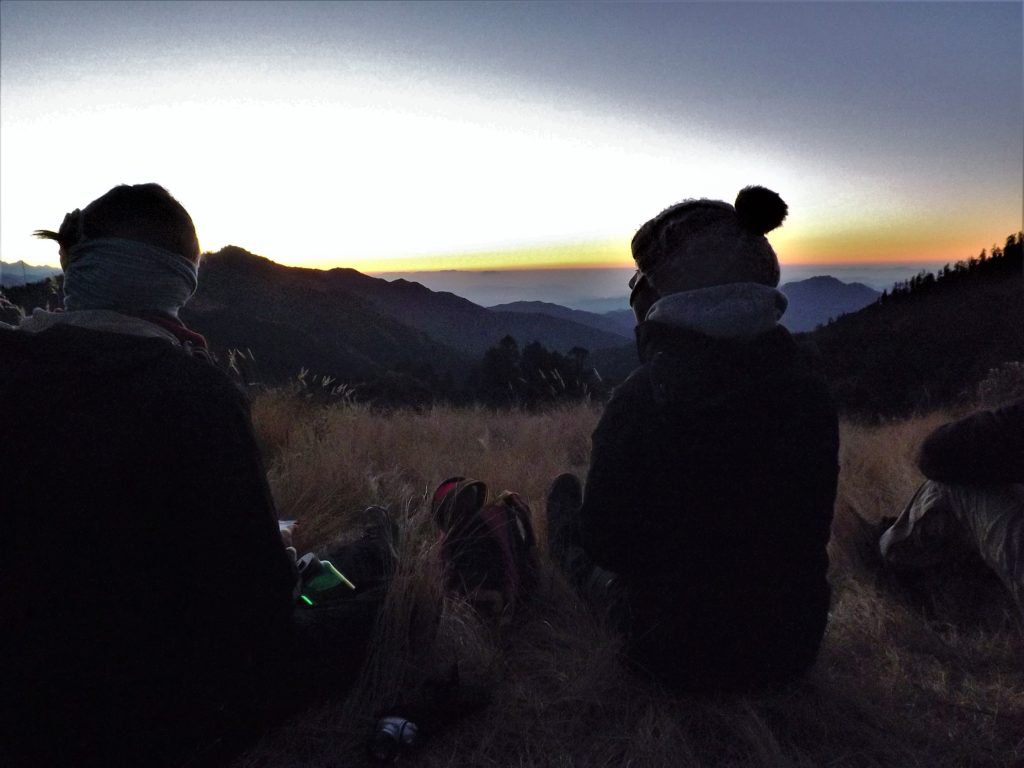 From Ulleri, we trekked to Ghorepani, where the main event is watching sunrise from Poon Hill. 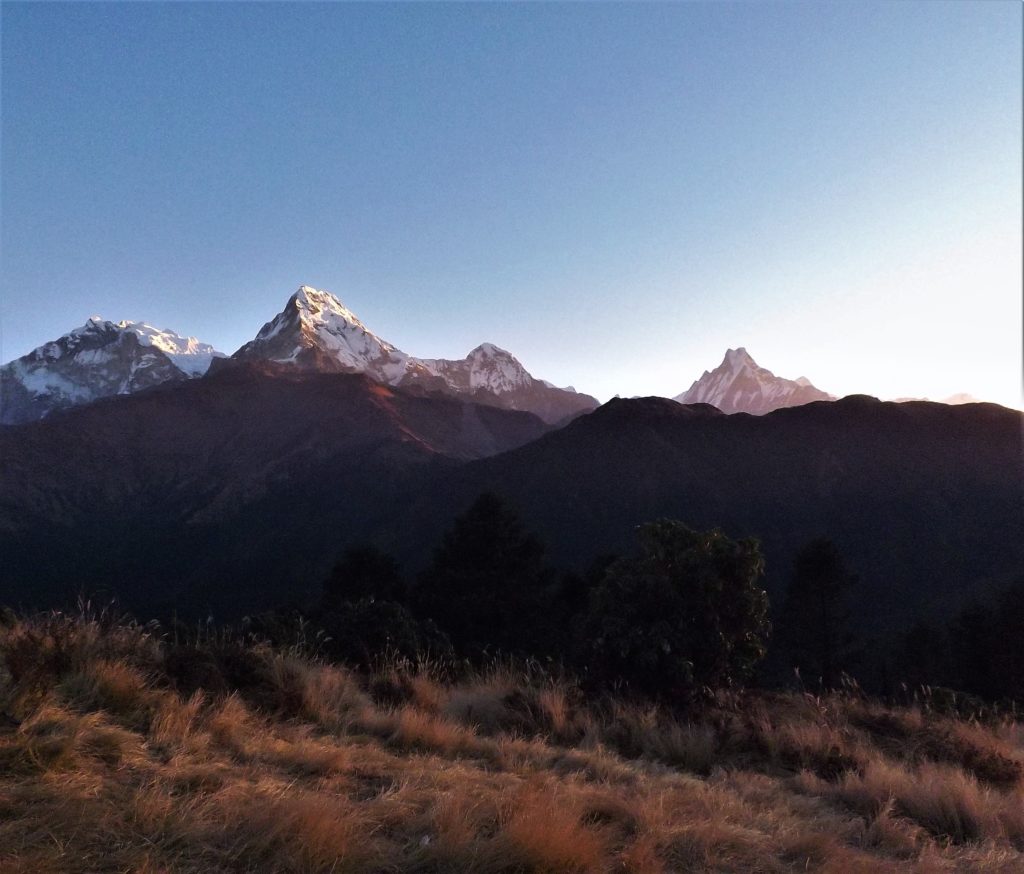 Talk about things you never knew belonged on your bucket list! 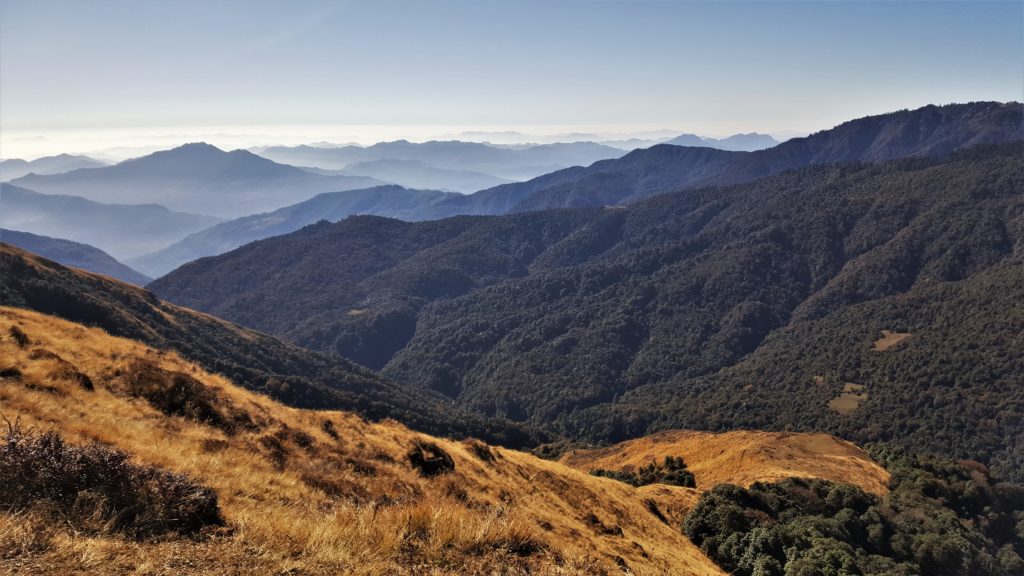 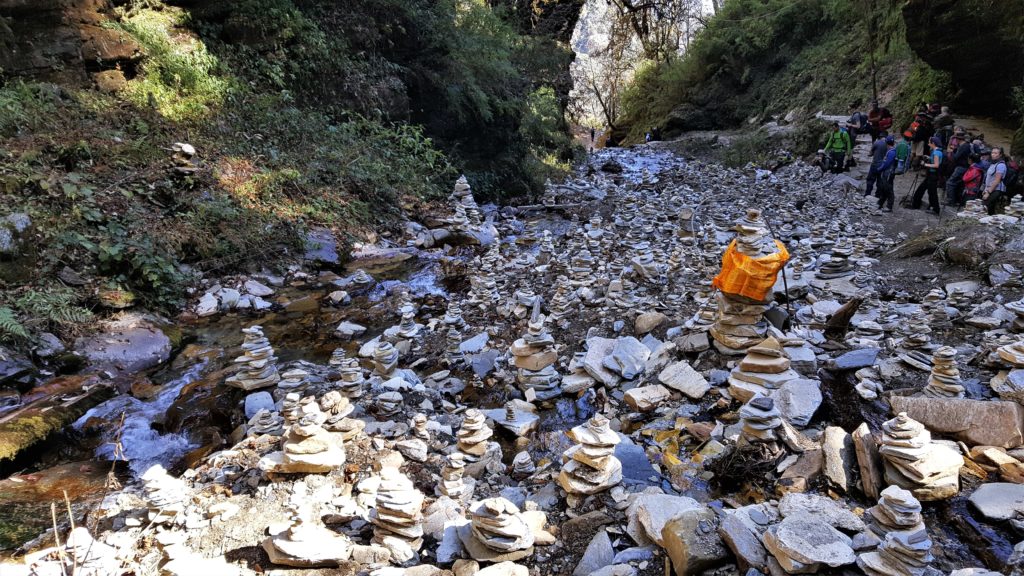 Between Ghorepani and Tadapani, we came across this field of cairns, each one built by a traveler for luck. 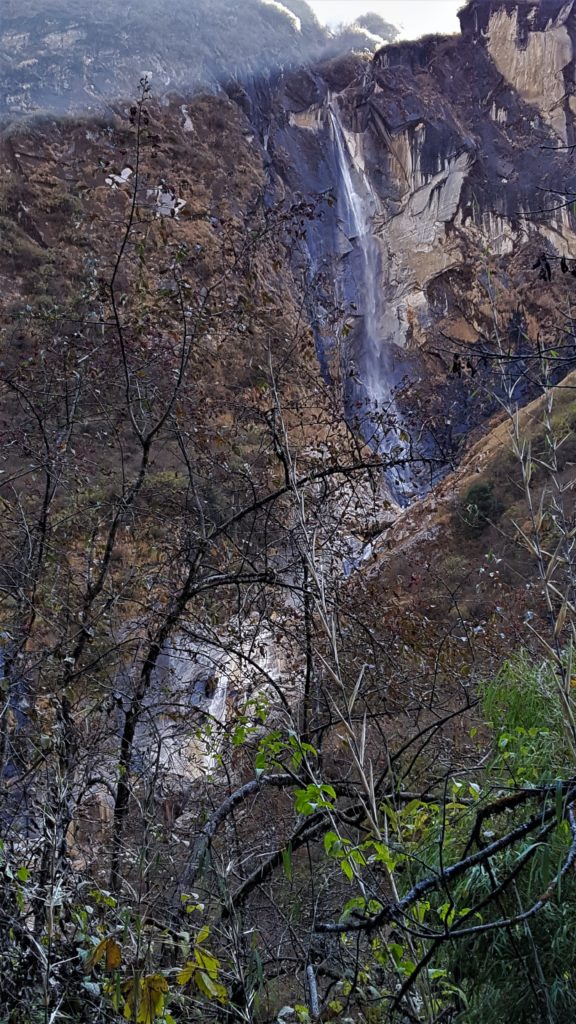 Other stops along the way included Sinuwa and Dovan. 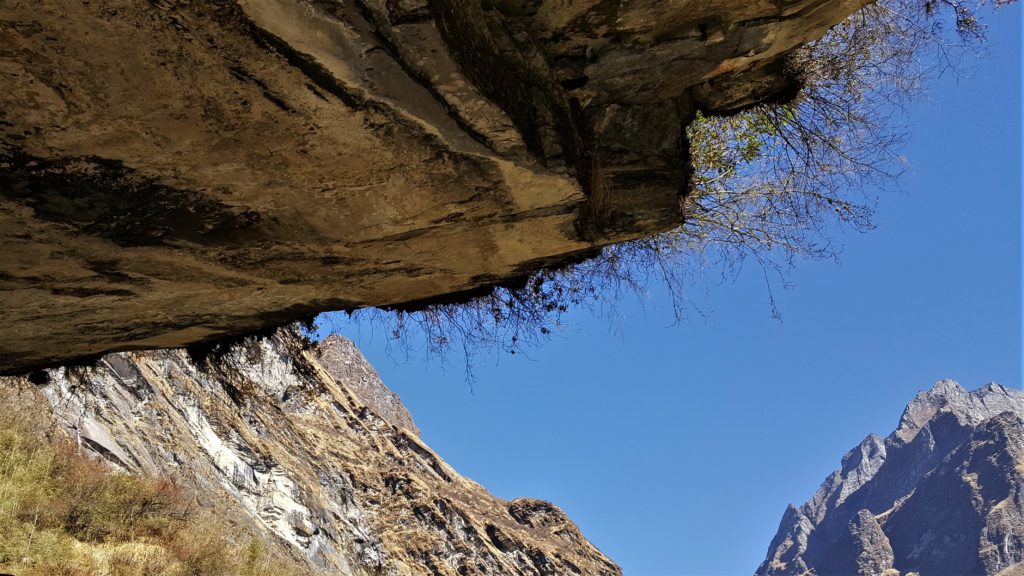 This cave between Dovan and Machhapuchhre Base Camp is a popular place to get out of the sun. 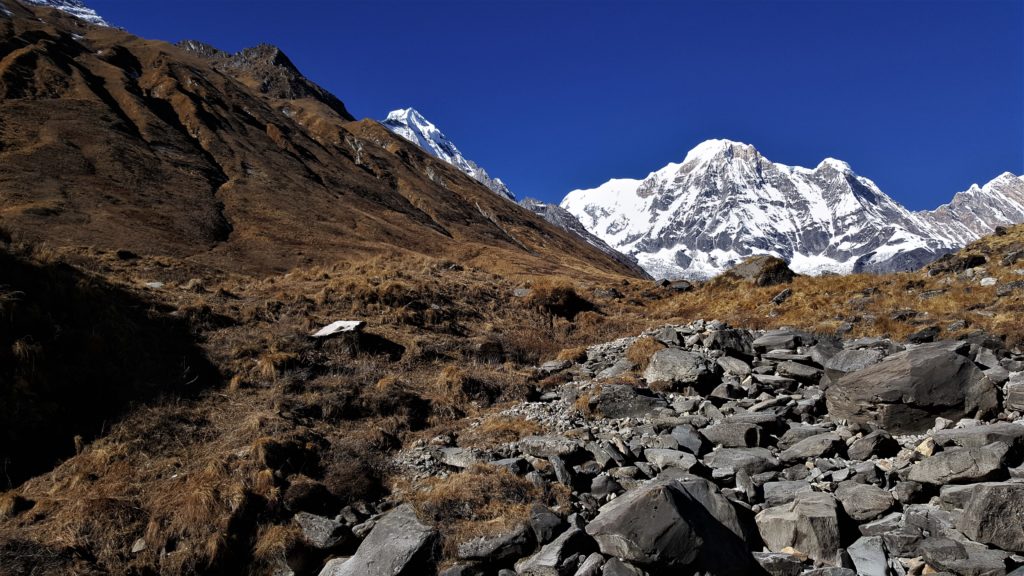 The final ascent to Annapurna Base Camp only takes a couple of hours. 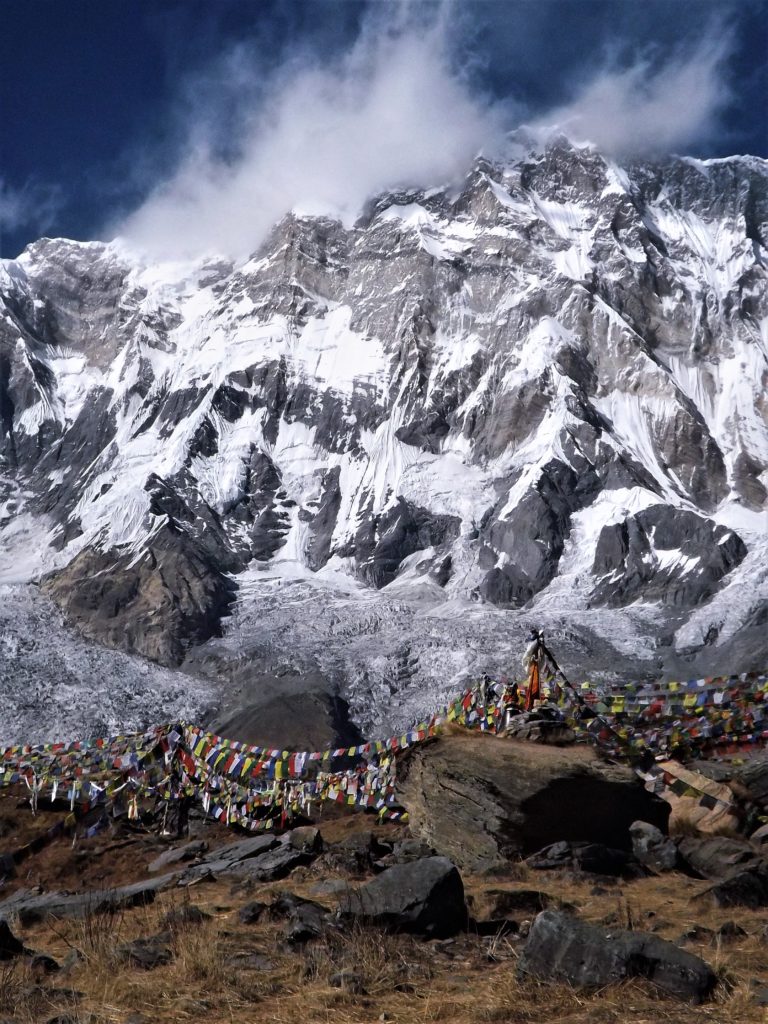 Nepal is a predominately Hindu country, but you’ll still see tons of Buddhist prayer flags all over the trails. 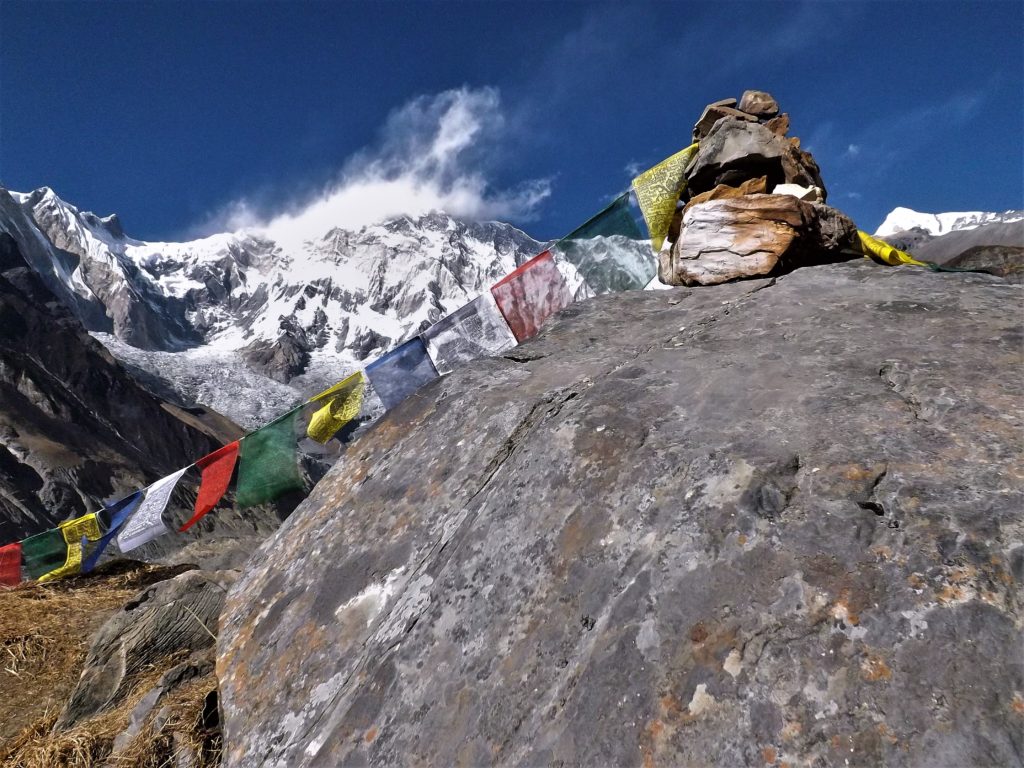 Success! After seven days of trekking, we reached Annapurna Base Camp at 4100 meters altitude. 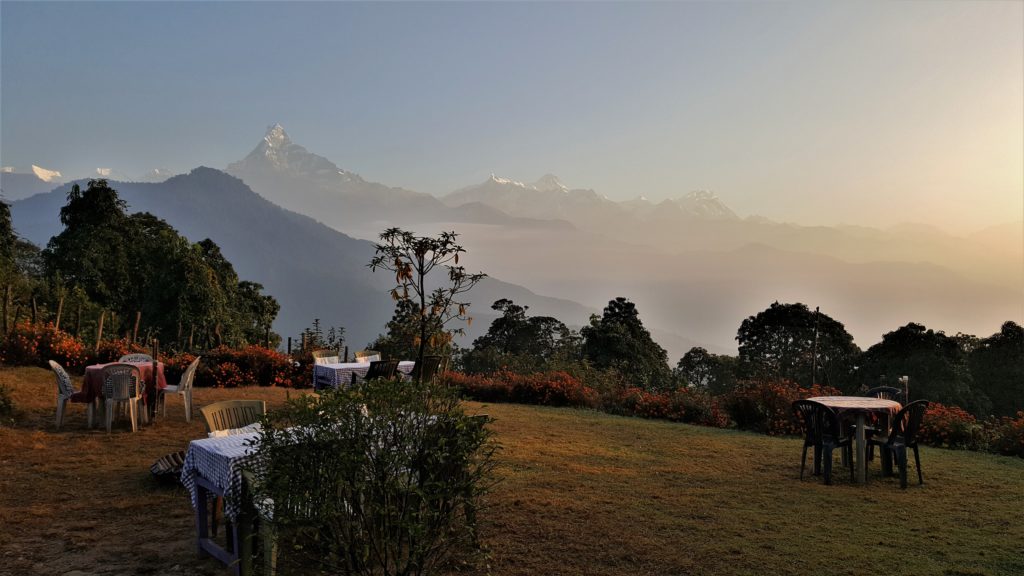 The three day descent to Pothana is even more grueling than the climb up, but the sunrise view is worth it.

Tips for trekking in the Annapurna Sanctuary

Practice on the stair master. My trek training was just taking long walks. At the advice of Intrepid, I thought as long as I could stay on my feet for four to six hours, I’d be okay. And I mostly was. But the Annapurna Sanctuary trek involves a lot of up and down. Much of the path is straight flagstone steps with many steep climbs and descents. If doing it again, I’d spend less time just walking in  my training and more time on the stairs. Pack light! There are many porters who get overloaded – it’s dangerous and irresponsible. Intrepid ensures no porter carries more than the legal limit, but less is always better. A few must-haves you don’t want to leave out: a headlamp for finding the bathroom at night, a SteriPen and water bottle to purify tap water and reduce waste, silk thermals for chilly nights at altitude, and cough drops. You can get a kind of decongestant on the trail, but no lozenges. Take the opportunity to detox. Drinking alcohol and eating meat make your ascent harder to adjust to. We kept a vegetarian diet and avoided alcohol until the trek was over. We had enough trouble hanging onto our health at altitude. No sense in making it more difficult. I couldn’t believe it when I saw folks drinking and smoking cigarettes up in the mountains. Withdraw all the cash you need for your trek in advance, but change it back to US dollars before you leave. Apparently, it is illegal to take Nepali rupees out of the country. Whoops! I didn’t get in any trouble with the law, but I am now in the quandary of having cash that no one will exchange. For the love of all that is holy, observe basic trail etiquette. Let people know verbally if you’d like to pass them, particularly on narrow paths. On the trail’s many suspension bridges, match the step and pace of the person in front of you. And always greet folks you encounter with a friendly ‘Namaste.’

Not sure about going solo? I trekked with an organized group and had a blast. What was your first multi-day trek? Tell me in the comments!

Planning your own long-term travels? This one-of-a-kind email series will walk you through planning a RTW trip itinerary in just 4 days!

No spam. Unsubscribe any time.

Is It Safe to Travel Yet?

As the COVID-19 pandemic continues, I urge you to consider your travel plans carefully. Research not just your destination, but each individual attraction or business you may visit. Look for Facebook groups where you can learn from locals about the state of their region. Wear a mask, observe social distancing and respect local laws and business policies. Personally, I will be taking only day or weekend trips within easy driving distance and focusing on outdoor attractions. Follow your own comfort level, but please be safe and respect others!

No spam. Unsubscribe any time.

I traded my draining desk job for a year of travel, and I'll show you how to do the same!

This digitally projected leaf twists around the fo

A blacklight tree of life by @mazingartstudio hold

Chillin' in a jungle hammock in Virginia. Yes, you

Told you there was more to Pinewood Social! ⠀⠀

Pinewood Social is huge, but let's start with the

When I was on my RTW trip, I spent my first birthd